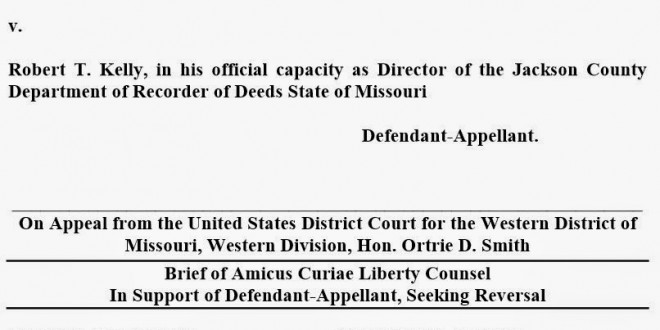 Yesterday the Liberty Counsel filed amicus briefs with the Eight Circuit Court of Appeals in the marriage cases out of Missouri and Arkansas. Via press release:

The issue before this Court and courts across this country is whether the divine creation of natural marriage as the union of one man and one woman will be recognized by fallible judges, or whether judicial tyranny will manifest itself in print,” said Mat Staver, Founder and Chairman of Liberty Counsel. “The judiciary is really what is on trial in the minds of the people. Marriage is objectively a union of a man and a woman. If the people lose confidence in the courts then judges lose their authority. Those are not my words. They are the words of former U.S. Supreme Court Justice Sandra Day O-Connor in the 1992 Planned Parenthood v. Casey abortion opinion. Courts must rely on the executive to enforce their orders, and unlike the legislature, courts cannot make new law. The authority of courts rests upon the confidence of the people who trust judges are interpreting the law according the constitution and text under review. When judges veer too far away from this straightforward duty, the people lose confidence, and when that happens, their persuasive authority is undermined.

The briefs cite a cavalcade of crackpots including Maggie Gallagher, Mark Regnerus, and Judith Reisner. The bulk of the briefs are devoted to the position that some gay men have gotten AIDS and therefore all LGBT people are ineligible to be married. Hit the links above to see the full filings.