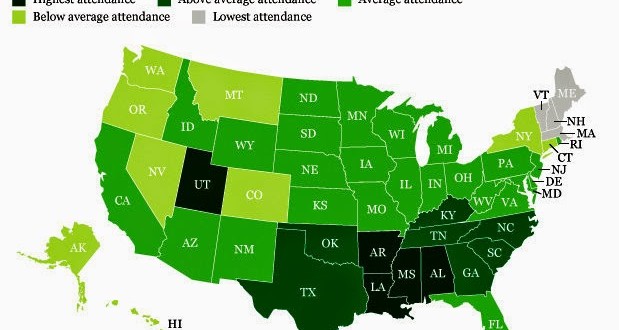 Five of the six New England states rank among the bottom 10 states for church attendance. Of these, Vermont, New Hampshire, Maine and Massachusetts have the lowest average attendance rates in the nation, with Connecticut not far behind. All other states in the bottom 10 are in the West, including the nation’s three states that are as far as one can go in the northwest corner of the country — Alaska, Washington and Oregon. States with average religious service attendance tend to cluster in the middle of the country.

Even in Utah, only 51% say they attend church every week. The national average, obviously, is much lower. A breakdown of each state and its overall ranking is at the link.