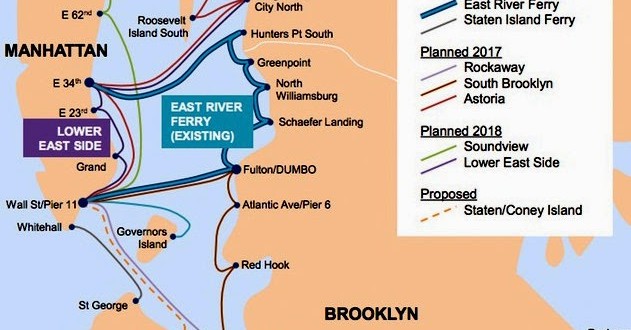 The East River ferry, launched by de Blasio’s predecessor, currently shuttles passengers to a limited number of stops in Brooklyn, Queens, and Manhattan along the East River, for $4 a ticket on weekdays and $6 on weekends. The new ferry service will be cheaper—Blasio promised yesterday that “new ferry rides will be priced the same as a MetroCard fare.” The service will be operated by private companies receiving government subsidies. De Blasio said he plans to allocate an initial $55 million in capital investment for the first five routes (excluding the Stapleton/Coney Island routes), and anticipates an annual city subsidy between $10-$20 million to keep the whole thing afloat. If completed as envisioned, the expansion would likely be the largest municipal ferry service in the United States, in terms of passenger use.

According to a city study, there was an 8% increase in property values for locations within walking distance of the East River ferry stops created by Bloomberg, yielding $24M in new annual tax revenue for the city. Annual ridership for New York City’s private ferry companies currently stands at about 10 million. The Staten Island Ferry, which is run by the city, has an annual ridership of 27 million.