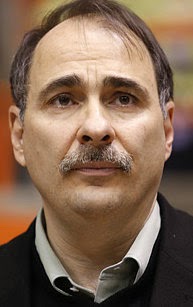 David Axelrod: Obama Was “Bullshitting” When He Said He Opposed Gay Marriage

Former White House advisor David Axelrod claims that President Obama lied about his opposition to same-sex marriage in order to help his 2008 election chances. Axelrod makes the claim in his new book.

“I’m just not very good at bullshitting,” Obama told Axelrod, after an event where he stated his opposition to same-sex marriage, according to the book. Axelrod writes that he knew Obama was in favor of same-sex marriages during the first presidential campaign, even as Obama publicly said he only supported civil unions, not full marriages. Axelrod also admits to counseling Obama to conceal that position for political reasons. “Opposition to gay marriage was particularly strong in the black church, and as he ran for higher office, he grudgingly accepted the counsel of more pragmatic folks like me, and modified his position to support civil unions rather than marriage, which he would term a ‘sacred union,’ ” Axelrod writes.

According to Axelrod, in early 2012 the president was pressuring aides to find a way for him to express support for same-sex marriage even though analysts told him it could cost him a win in North Carolina. Five months later that opening presented itself via Joe Biden’s now-famous Meet The Press declaration, which some believe was carefully planned in advance. Teabagistan is reacting to Axelrod’s claim in predictable fashion.

Previous When You Have A Demon In Your Bedroom
Next Roy Moore: I Issued That Order Because Next Fathers Will Marry Their Daughters