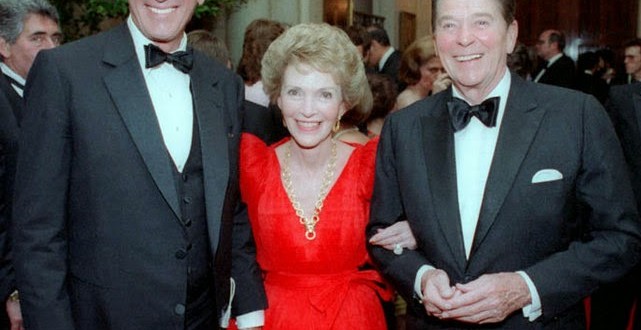 Buzzfeed reporter Chris Geidner tonight revealed that official White House and Reagan documents show that Nancy Reagan rebuffed Rock Hudson’s plea for help in getting access to experimental treatment as he lay dying of AIDS in Paris. The request was made through publicists Yanou Collart and Dale Olson.

Three days after Hudson’s collapse, he still lacked permission to go to the French hospital or to have Dormant see him in the American Hospital. His team’s initial attempts on the ground in Paris were not working. So they started working higher up: Collart would work her contacts with French defense officials. Back in America, Olson would ask for help from the American government.

In a desperate telegram sent at 12:22 p.m. ET on July 24, 1985, Olson made his case directly to the White House in a message addressed to Mark Weinberg — a special assistant to the president and deputy press secretary in the White House.

“Doctor Dominique Dormant specialist treating Rock Hudson in Paris, reports only one hospital in the world can offer necessary medical treatment to save life of Rock Hudson or at least alleviate his illness. This hospital is Ministere du la Defence Centre d’Researches du Service de Sante des Armees Percy Hospital in the city of Clamart,” the telegram read, with Olson going on to give the phone number to the hospital.

“Commanding general of Percy Hospital has turned down Rock Hudson as a patient because he is not French. Doctor Dormant in Paris believes a request from the White House or a high American official would change his mind. Can you help by having someone call the commanding general’s office at the Percy Hospital at the above number,” the telegram stated.
“Please advise what can be done.”

According to Buzzfeed, the former First Lady was “very sorry” to hear of Hudson’s condition but advised staffers that the Reagans shouldn’t give the appearance of pulling strings for their celebrity friends. She agreed with their suggestion to forward Hudson’s request to the US Embassy in Paris.

Noted AIDS activist Peter Staley told Buzzfeed: “I’m sure if it had been Bob Hope in that hospital with some rare,
incurable cancer, Air Force One would have been dispatched to help save
him. There’s no getting around the fact
that they left Rock Hudson out to dry. As soon as he had that
frightening homosexual disease, he became as unwanted and ignored as the
rest of us.”

Ronald Reagan finally made his first major address on AIDS nearly two years later at a May 1987 American Foundation for AIDS Research event. By the end of that year over 41,000 Americans had died of the disease. Buzzfeed wryly observes that amfAR was launched in 1985 with a $250,000 donation by Rock Hudson.

I strongly recommend you read Chris Geidner’s full report. The excerpt above does not do his work justice and there are copies of telegrams and White House correspondence in his story.