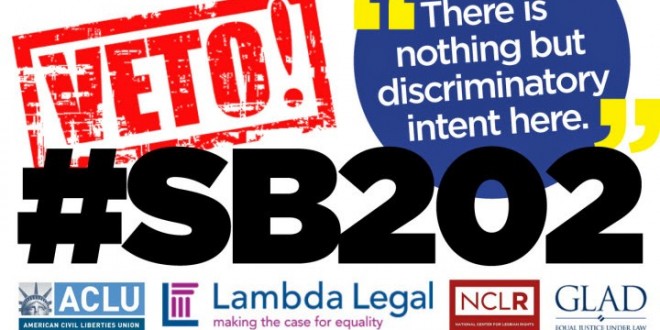 Two weeks ago the Arkansas legislature approved a bill that would ban any municipality from enacting LGBT anti-discrimination ordinances. Without a veto from Gov. Asa Hutchinson, that law goes into effect tomorrow. Yesterday Lambda Legal, the ACLU, GLAD, and the NCLR issued a last-minute plea to Hutchinson.

SB 202 was passed to thwart cities like Fayetteville and Eureka Springs that recently have enacted sexual orientation and gender identity nondiscrimination protections. So if Governor Hutchinson allows this bill to take effect, it will amount to a giant, flashing “Gays Stay Away” sign. It will block sincere local efforts to show that Arkansas communities are welcoming places beckoning talent, innovation and workforce diversity. It will do precisely what Arizona’s Governor Brewer decided to avoid last year when she vetoed that state’s “discrimination as religion” bill.

Recalling Colorado’s fatally flawed Amendment 2, which years ago explicitly targeted lesbians, gay men and bisexuals (and not heterosexuals), many are asking whether SB 202 is a similarly unconstitutional denial of equal protection. When the Supreme Court struck down Amendment 2 in Romer v. Evans, it underscored that the case record revealed anti-gay “animus” propelling the popular vote and no legitimate government reasons for precluding local nondiscrimination protections for LGBT people, and for no one else.

It is that manifest and dangerously discriminatory purpose that causes so many to call out the equal protection problem at the heart of SB 202. Every lawmaker who voted for this bill has taken an oath to uphold both the Arkansas Constitution and the United States Constitution. Both charters contain equal protection guarantees. Governor Hutchinson has taken that oath as well. He also has pledged to shepherd the State’s economy. We call on him to honor both commitments by vetoing SB 202.

Previous Tired Old Queen At The Movies #130
Next ALABAMA: Haters Stage Another Rally