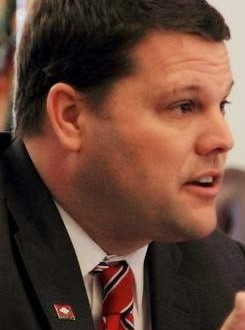 The Arkansas legislature gave its final thumbs-up Friday to a bill that would block cities and counties from enacting antidiscrimination laws that protect LGBT people. The Arkansas House of Representatives voted decisively, 57-20, for SB202, with seven members voting present. Having already cleared the state Senate Monday, the bill now heads to Gov. Asa Hutchinson, who is not expected to veto the legislation. The bill’s sponsor, Republican State Sen. Bart Hester [photo], told BuzzFeed News this week that he sponsored the measure to create consistent policies across Arkansas that will attract business, and because he was infuriated that cities were attempting to expand civil rights laws for LGBT people. “This bill creates uniformity for business, and citizens for that matter, so that our employment laws will be the same throughout the state,” Republican Rep. Bob Ballinger, the bill’s House sponsor, said before today’s vote on the House floor. “There are some things on a statewide basis we deal with all the time, such as murder and fraud — a variety of things that need to be uniform,” he said.

Fayetteville’s LGBT rights ordinance was repealed in December following a vicious campaign by the Family Research Council and the Duggar family. Early this week the popular LGBT destination of Eureka Springs hastily approved a sweeping rights bill, becoming the only municipality in the state with such a law on the books. GOP members of the Arkansas legislature say that they believe their bill will overturn the ordinance in Eureka Springs.