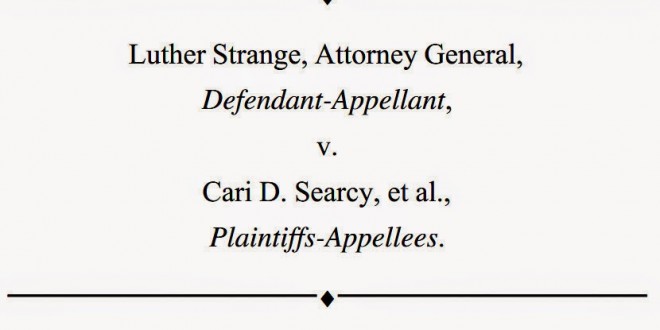 As we explained in the motion to stay, the trial court’s judgment is due to be reversed because: (1) it did not follow binding Supreme Court precedent; (2) it defined the fundamental right to marry as the right to marry anyone of any sex, even though that formulation of the right to marry is not deeply rooted in our history or tradition; and (3) it did not even mention our expert’s testimony that recognizing opposite-sex marriage promotes the state’s interest in linking children to their biological parents—an interest that is not promoted by recognizing same-sex marriages because one or more of the child’s biological parents are necessarily not a party to the marriage.

The plaintiffs have not responded to this showing. They have, notably, not defended the District Court’s reasoning about the supposedly fundamental right of same-sex marriage, which caused the District Court to apply strict scrutiny. Nor have they proposed any other rationale that would justify the District Court’s decision. The plaintiffs in the related Strawser case, Appeal No. 15-10313-A, discuss the merits at more length, and we address those arguments in our reply there. But the main problem for both groups of plaintiffs is the same. They have not answered this question: if marriage is not a union of one man and one woman, then what is it?

These problems of inconsistency and confusion are especially salient in this case. First, the Attorney General is the only defendant to this lawsuit, and he (of course) has no role in the issuance of marriage licenses, adoptions, etc. So it is unclear, as a formal matter, what the district court’s injunction requires of his office or anyone else involved in state or local government. Second, there are other same-sex marriage cases pending in Alabama’s other district courts, including one in which summary judgment has been briefed and pending for several months. Those district court judges are, obviously, not bound by the district court’s judgment in this case and could add to the confusion by issuing contrary decisions at any moment. The plaintiffs cannot whistle past these problems as if they do not exist.

Read the full brief at Equality Case Files. Pending a decision by the Eleventh Circuit, marriages would commence next Monday morning.