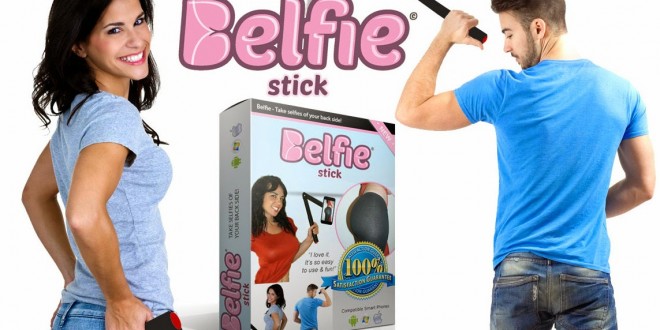 From the website: “Finally, back side selfies! With our bendable stick, you can position your back side without the need of a mirror and shoot the exact angle you are looking for. Bend in ways you never thought possible with our patent-pending design!”

Regular selfie sticks, of course, have been around for a decade. Yesterday the Guardian profiled the man who filed the first patent application in 2005. An excerpt:

Wayne Fromm was on holiday in Florence in 2002, with his daughter Sage, when they ran into the classic tourist’s problem. They wanted a photograph of themselves on the Ponte Vecchio, but it was crowded, there was nowhere to rest the camera and they felt awkward about asking somebody else to take their picture. Being an inventor, mostly of toys, Fromm was not going to ignore the problem. “We were just alternating pictures,” he tells me from Las Vegas, where he’s been attending this year’s Consumer Electronics Show. “So when we came back to Toronto I started thinking about how I could create something.” It would take Fromm a long time to perfect a telescopic pole and grip that you could travel with, but which would hold a camera far enough away without slipping, breaking or being too heavy. “I spent a couple of years looking at umbrellas, taking them apart,” he says. “I was studying magnetic pickup tools. I was studying anything that had extendable segments and a rod. I just kept meeting one impasse after another.” Finally, in 2005, he filed patents – later granted – for a device he called the Quik Pod (as in “quick tripod”).