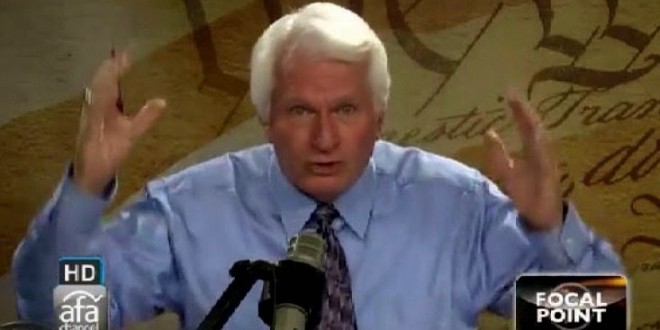 From what we have been able to gather, Fischer has not actually been dismissed by AFA but has rather merely been stripped of his title as director of issues analysis and his role as spokesman for the organization. Fischer will reportedly continue to produce his daily radio program for the AFA’s radio arm, American Family Radio.

If this is indeed the case, then the AFA has literally accomplished nothing with this stunt and has utterly failed to distance itself from Fischer’s utterly despicable views. The primary venues though which Fischer has managed to spread his bigotry for the last six years have always been owned, operated, and funded by the American Family Association and that relationship appears to remain intact.

Stripping Fischer of his title as AFA spokesman in no way alleviates the AFA of its responsibility for Fischer’s toxic views given that the only reason Fischer even has a platform from which to spread those views is because AFA is providing it to him and paying him to do so!

From the very start of Fischer’s time at AFA, the organization has pathetically attempted to have it both ways: providing the very microphone from which Fischer speaks while simultaneously claiming that it has bears no responsibility for the message that he sends.

The AFA latest effort to rid itself of Fischer’s rancid reputation is little more than a rhetorical accounting trick aimed at creating the false impression that the organization has wiped Fischer’s bigotry off of its books.

Hit the link for a recapping of Fischer’s bizarre career before the AFA launched into national prominence. At the very least, perhaps after yesterday’s stunt GOP leaders will be less willing to appear on Fischer’s show.