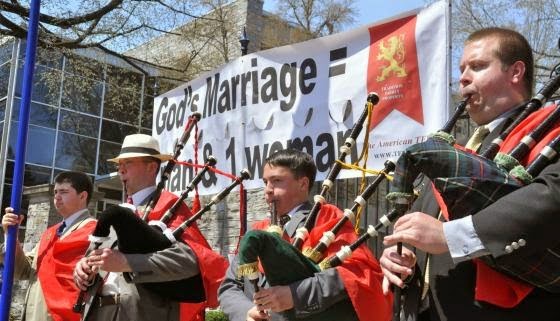 From the Red-Caped Catholic Loons:

Dissident Catholic pressure groups — aided by the liberal media — are feverishly working to dismantle vital Church teaching on marriage and family at the next Synod on the Family in Rome. In fact, they are bombarding the Holy Father and the Synod Fathers right now with messages of revolt against traditional moral values as they clamor for “change, change, change” inside the Church. At this critical time, we must defend the truth and ask the Holy Father to protect the future of the family. TFP Student Action is joining forces with over 20 more pro-family groups around the world to collect as many signatures as possible before the next Synod starts. This prayerful petition is a worldwide effort. Everyone is invited to sign. May God reward you.

Holy Father, In view of the Synod on the family to be held in October 2015, we filially address Your Holiness to express our fears and hopes regarding the future of the family. Our fears arise from witnessing a decades-long sexual revolution promoted by an alliance of powerful organizations, political forces and the mass media that consistently work against the very existence of the family as the basic unit of society. Ever since the so-called May 1968 Sorbonne Revolution, a morality opposed to both Divine and natural law has been gradually and systematically imposed on us so implacably as to make it possible, for example, to teach the abhorrent “gender theory” to young children in many countries. Catholic teaching on the Sixth Commandment of the Law of God shines like a beacon in the face of this ominous ideological objective. This beacon attracts many people — overwhelmed by this hedonistic propaganda — to the chaste and fecund family model taught by the Gospel and in accordance with natural law.

Previous Tom Petty: No Lawsuit, No Hard Feelings
Next Sen. John McCain To Code Pink Protesters: “Get Out Of Here, You Low-Life Scum”