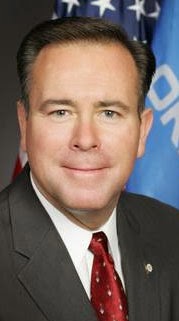 Marriage licenses would become a thing of the past in Oklahoma under a bill filed by state Rep. Todd Russ. The Cordell Republican says he wants to protect court clerks from having to issue licenses to same-sex couples. He doesn’t want these workers put in the position of having to condone or facilitate same-sex marriage. Under his plan, a religious official would sign a couple’s marriage certificate, which would then be filed with the clerk. Marriages would no longer be performed by judges. If a couple did not have a religious official to preside over their wedding, they could file an affidavit of common law marriage. “Marriages are not supposed to be a government thing anyway,” he said Wednesday. Russ, a credentialed Assemblies of God minister, is upset with rulings that have supported same-sex marriage.

Russ: “Oklahoma voted overwhelmingly against same-sex marriage, and yet the Supreme Court stuck it down our throats.” Oklahomans For Equality say that about 3200 same-sex marriage licenses have been issued in the three months since it became legal. (Tipped by JMG reader Shaun)

Previous TODAY: SiriusXM At 3:30PM
Next JMG Is A Shorty Awards Finalist