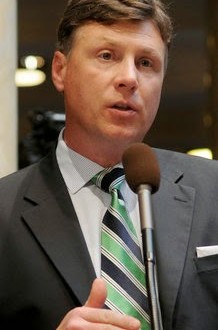 GOP Kentucky state Sen. Brandon Smith wants his DUI charge dismissed because an 1891 amendment to the state constitution bars the arrest of lawmakers while the legislature is in session.

Smith was arrested and charged with DUI on Jan. 6, the first day of the 2015 legislative session. Smith had a .088 percent blood alcohol level in a portable breath test, according to a citation filed in Franklin County Circuit court. A person is presumed drunk when the alcohol to blood ratio is .08 and above. But attorney Bill Johnson has filed a motion to dismiss the charges citing section 43 of the Kentucky Constitution which states that “members of the General Assembly shall, in all cases except treason, felony, breach of surety of the peace, be privileged from arrest during their attendance on the sessions of their respective Houses, and in going to and returning from the same.” “If you can’t arrest them, then you can’t try them,” Johnson said. That language was added to the constitution in 1891. Johnson said the purpose was to “keep legislators from being bothered by people who would arrest them during sessions.”

Smith made his JMG debut last summer when he declared that climate change is a hoax because the temperature on Mars “is exactly as it is here.” He also broke the news that there are no coal mines on Mars.