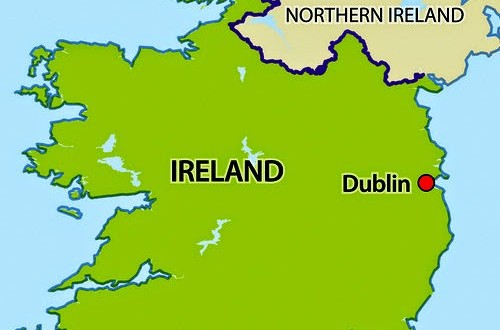 The Irish government today published the text of the national referendum on same-sex marriage, which will be held in May. Voters will be asked if they agree or disagree with this: “Marriage may be contracted in accordance with law by two persons without distinction as to their sex.” More from RTE News:

Fianna Fáil Justice Spokesperson Niall Collins said his party was happy to support the referendum and welcomed the wording, saying it was clear and concise. The Gay and Lesbian Equality Network, the Irish Council for Civil Liberties and Marriage Equality have said the publication was “historic”. GLEN Chair Kieran Rose said: “Today we move a step closer to full inclusion in our Constitution for lesbian and gay couples.” ICCL Director Mr Mark Kelly added: “The proposed amendment would update the Constitution to say that any two people can marry, regardless of their sex.” Marriage Equality Chair Grainne Healy said: “We look forward to a positive campaign for the referendum, which focuses on the value of marriage to everyone in Irish society and explains why marriage matters to lesbian and gay couples.”

While polls indicate strong support for the referendum’s passage, activists are urging caution. Via the Irish Times:

Campaigners on both sides cite the 2012 children’s referendum as proof that polls can be a poor guide. In that case, the polls at one stage showed 80 per cent in favour but, despite a poorly funded No campaign whose most prominent faces were a former MEP (Kathy Sinnott) and a newspaper columnist (John Waters), the Yes vote on polling day was only 58 per cent. I think this will be a very tight referendum,” says Brian Sheehan of the Gay and Lesbian Equality Network (Glen). “I think Irish people rightly take constitutional change very seriously. We know that from every other referendum. Despite the strong support in the polls, we know we’ll need every single possible vote on the day in order to win the referendum.” On this, both sides agree. “I’ll put it this way,” says the columnist David Quinn, who heads the Iona Institute, a Catholic advocacy group that opposes same- sex marriage. “It’s beatable with a really good campaign but on the other hand it could also pass by 20 or 30 points.”