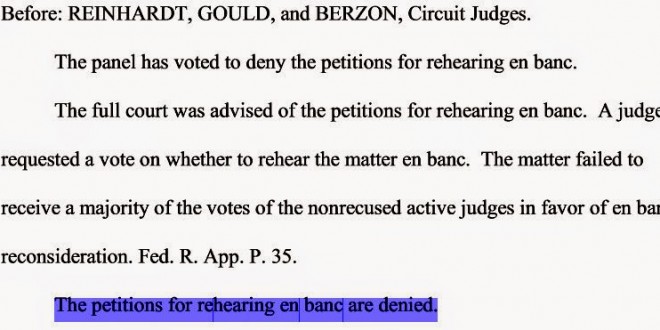 After referring the issue to the full roster of nonrecused judges, the Ninth Circuit Court has denied Idaho Gov. Butch Otter’s demand for an en banc rehearing of his same-sex marriage appeal. The National Center For Lesbian Rights reacts:

“The Ninth Circuit correctly recognized that there is no need to reconsider the panel’s decision that Idaho’s marriage ban violates basic constitutional guarantees of equal protection. The Ninth Circuit’s decision striking down the Idaho marriage ban is consistent with the rulings of three other federal appeals courts, which have rightly concluded that our Constitution cannot tolerate the profound harm that denying same-sex couples the freedom to marry inflicts those couples and their children.”

Three judges dissented from the majority. The dissenting opinion, which goes on and on for many pages, cites the 1970 Baker V Nelson ruling.