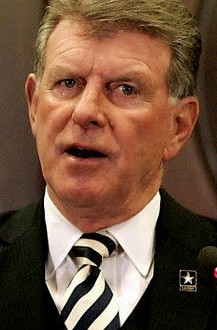 Idaho’s governor and attorney general have filed separate petitions to the U.S. Supreme Court, fighting against gay marriage and arguing that the state’s case has national consequences. Same-sex marriage has been legal in Idaho since an October ruling by the 9th U.S. Circuit Court of Appeals, which has struck down bans across the West. Attorney General Lawrence Wasden’s filing Friday states that the issue is a matter of a state’s right to define marriage without the federal government’s involvement. “This case presents the Court with the opportunity to resolve a divisive split on a question of nationwide importance: Whether the United States Constitution now prohibits states from maintaining the traditional definition of civil marriage, i.e., between one man and one woman,” Wasden said in the petition.

Last month the state was ordered to pay $400K to the lawyers for the plaintiffs who overturned Idaho’s ban. (Tipped by JMG reader Rob)