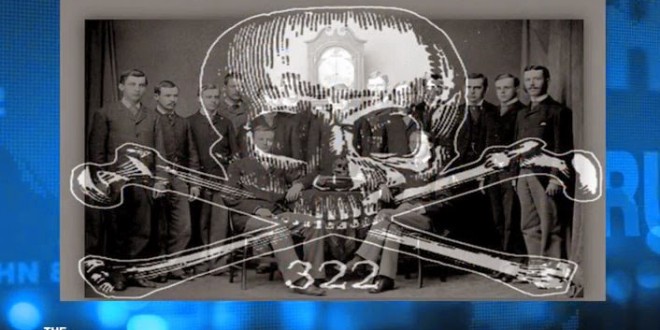 “Did you know that Skull & Bones, which is a major fraternal organization run out of Yale University, which Poppa Bush – George Bush – were all part of and many who are now part of the 620 billionaires and global and world leaders – the Conference On Foreign Relations – people who are making decisions in media and education and politics worldwide – have come through the Skull & Bones process. For the most part, in the initiation you lie in a casket and then members of the Skull & Bones on campus at the time will walk past the casket and urinate on you and defecate on you. You are also then expected to have anal sex – any member of Skull & Bones – you’ll have to have – they’ll have to insert their penis into your anus. George Bush had over 100 men insert their penis in his anus. Poppa Bush – old man Bush – the CIA chief – had over 100 men insert their penis into his anus. And every other member of Skull & Bones, this hideous group of the New World Order, has had – at least 100 times – a penis injected into their anus in order to be received and become a member of this elitist fraternal group called Skull & Bones. That is documented historical proof, you can check it out with Alex Jones.” – Pastor James David Manning, “the sodomite slayer.”

Previous And Then After They Opened It….
Next GEORGIA: Marriage Case Put On Hold