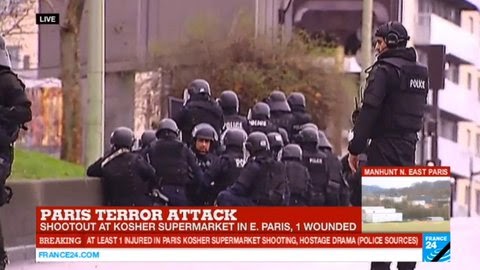 French authorities waged two intense standoffs with gunmen in and around Paris early Friday afternoon — one involving the two brothers wanted in the Charlie Hebdo massacre and the other a hostage situation at a kosher grocery store near eastern Paris’ Porte de Vincennes. It was not immediately known if the two situations were related, but both underscored France’s nightmare and anti-terrorism fight.

The hostage situation spurred police anti-terror units and the French internal security directorate, known as the DGSI, to race to the scene in eastern Paris, the city’s prosecutor’s office said. Hostages were taken after a shooting there or nearby. CNN affiliate France 2 aired live video of police tactical teams getting into position at the scene of the standoff.

Meanwhile, law enforcement officers had also surrounded a building about 40 kilometers (25 miles) northeast in the town Dammartin-en-Goele. Authorities have expressed a high degree of certainty that they have surrounded the Kouachi brothers — the suspects in Wednesday’s killing of 12 people at the offices of satirical magazine Charlie Hebdo — in Dammartin-en-Goele, which is northeast of Paris and a few miles from Charles de Gaulle Airport. Interior Ministry spokesman Pierre Henri Brandet tweeted that it’s not confirmed whether or not the brothers are holding anyone hostage.

All US cable news outlets are covering the situation live.