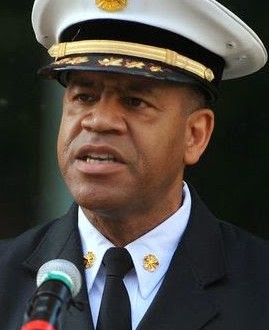 Former Atlanta Fire Chief: Gays Got Me Fired For Expressing My Christian Beliefs

You didn’t think Todd Starnes would let this guy go unmartyred, did you?

“The LGBT members of our community have a right to be able to express their views and convictions about sexuality and deserve to be respected for their position without hate or discrimination,” Cochran told me in an exclusive interview. “But Christians also have a right to express our belief regarding our faith and be respected for our position without hate and without discrimination. In the United States, no one should be vilified, hated or discriminated against for expressing their beliefs.” Cochran told me that someone within the department obtained a copy of the book and took it to openly-gay city council member Alex Wan. Wan released a statement supporting Cochran’s termination and said it “sends a strong message to employees about how much we value diversity and how we adhere to a non-discriminatory environment.” The book caused a firestorm within Atlanta’s LGBT community and there were many calls for him to be fired – a decision the mayor finally agreed to. “I guess they got what they asked for,” Cochran said.

As reported here earlier, not only did Cochran distribute his anti-gay book to his subordinates, during his suspension he went on a speaking tour of Atlanta churches where he declared that he would continue to proselytize at work upon his return. The local Atlanta paper got it right yesterday: “Cochran forced his own firing.”