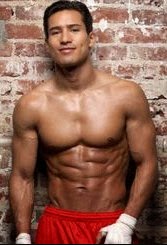 Emmy Award winning host of the popular nationally syndicated entertainment program Extra, Mario Lopez will preside over the 2015 Miami Beach Gay Pride parade and festival as Grand Marshal, announced Mark Fernandes, chair of the Pride Board. As Grand Marshal, Lopez will lead the enthusiastic and colorful parade that is expected to draw more than 100,000 spectators on Sunday, April 12. The Miami Beach Gay Pride parade kicks off at noon along famed Ocean Drive between 5th and 15th Streets and will be followed by the Pride Festival with live performances from four stages, community booths and refreshments. An ardent proponent of LGBTQ issues, Lopez is a long-time supporter of GLAAD.

RELATED: Yesterday Lopez told the Huffington Post that he lost his virginity on the day before his 13th birthday.