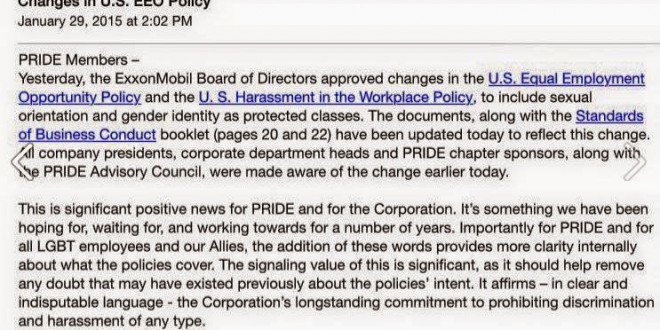 JMG reader Mike forwards us yesterday’s message from ExxonMobil’s LGBT employee group, which notes that the company’s board of directors has approved the inclusion of sexual orientation and gender identity as protected classes. In July 2014 ExxonMobil announced that it would comply with President Obama’s executive order regarding companies with federal contracts, but at that time a company spokesman would not say if that compliance would mean a formal change to ExxonMobil’s equal employment opportunity policy. ExxonMobil’s shareholders had long rejected such a change, voting it down for 17 consecutive years and earning the lavish praise of Tony Perkins, who will surely have the sadz about today’s news.