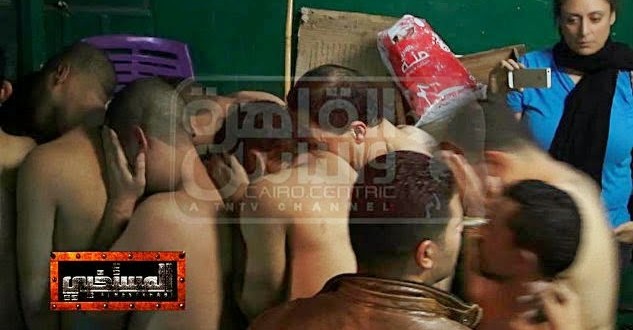 EGYPT: Men Arrested In Cairo Bathhouse Raid Are Acquitted Of All Charges

An Egyptian court has cleared 26 men arrested after a raid on a bath house in Cairo last month and charged with “inciting debauchery”. The men were arrested a month after eight men were jailed for appearing in a video alleged to show a gay marriage. Rights groups have condemned Egypt’s treatment of gay people, in particular the use of anal testing to determine whether people are homosexual. Though homosexuality is legal in Egypt, it remains a taboo. Families of those cleared reacted with jubilation in court when the verdict was announced. The Daily Telegraph‘s Louisa Loveluck, who witnessed the trial, said that according to lawyers at least one of the men had been raped while in the custody of Cairo police. She added that the defendants were standing in a cage, handcuffed together and trying to cover their faces. At the time of the arrests, local prosecutors said that the bath house owner was “accused of turning the facility into a site of immoral and indecent conduct and group homosexuality”.

The defendants had faced between 1-9 years in prison on varying degrees of “debauchery” — the most common Egyptian legal term used in cases against men accused of homosexuality. Though homosexuality is not technically illegal in Egypt, the police and courts have a history of persecuting the gay community in this socially-conservative country. That Monday’s ruling went they way it did surprised many observers. “It’s unprecedented,” said longtime human rights activist Scott Long. “This just doesn’t happen.” The session lasted barely a minute — just enough time for the judge to do a roll-call of the defendants’ names before uttering a single word: “innocent.” The court immediately erupted into raucous celebration as the men inside the courtroom cage shouted and waved their shackled hands and attending relatives yelled and sobbed in relief.

A pro-government television station showed video of police dragging the half-naked men out of the bath house last month. They were subsequently charged with debauchery. Covering their faces with sweaters or hats, they were marched into the courtroom on Monday, a police officer kicking one and urging them to hurry as they approached a cage used to hold defendants during court sessions. Highlighting sensitivities in Egypt, a conservative Arab state, people in the court exploded in anger when a journalist took a picture of the men. Someone tried to choke the photographer. The most recent case to make headlines saw eight men sentenced to three years in jail in November after they appeared in an online video purporting to show the country’s first gay marriage ceremony.

VIDEO: Families of the defendants rejoice.