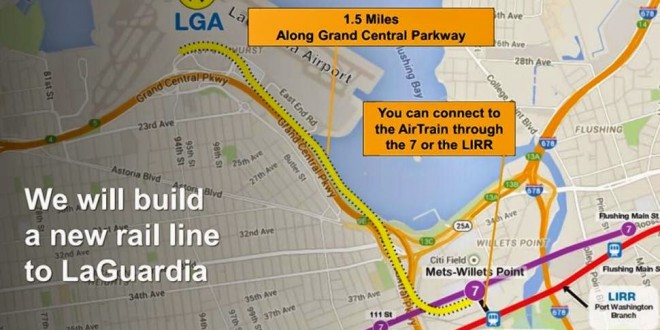 During his State Of The State address, yesterday New York Gov. Andrew Cuomo proposed connecting LaGuardia Airport to New York City’s rail system via a new AirTrain line. Adding rail service to LGA is an idea that has been pitched and abandoned several times in recent decades.

Cuomo’s plan involves a 1.5 mile long LGA AirTrain running over the Grand Central Parkway, connecting with MTA’s 7 subway line, as well as the Long Island Rail Road’s Port Washington branch at the Mets-Willets Point station. A typical ride from Grand Central Terminal to Willets Point is about 30 minutes via the subway, while the Long Island Rail Road currently only stops at the station during sporting events at Citi Field or Arthur Ashe Stadium. The AirTrain plan was just a small portion of a larger speech given by Governor Cuomo on Tuesday morning, with only a few details set in stone as of yet. The joint Port Authority and MTA project is initially estimated to cost $450 million, and construction could be completed within five years after all approvals are granted, according to a short statement released by the Port Authority.

Cuomo did not elaborate on a source of funding for the project. Next week the MTA is expected to authorize a subway and bus fare increase, raising the single-ride price to $2.75 and the price of a monthly pass to $116.50. Cash tolls on the Verrazano Bridge will rise to $16.00. (The Port Authority operates the bridges and tunnels to Jersey.)

RELATED: AirTrain service to JFK launched in December 2003 after five years of construction that ended up costing nearly $2B. That line, however, is much longer than the one proposed for LGA.