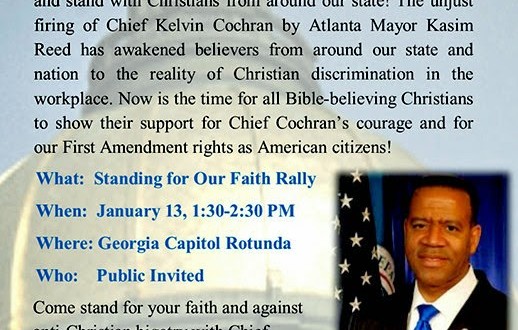 The image above comes via NOM. Tony Perkins will also be there in Atlanta today. From his press release:

Atlanta’s fire department is supposed to put out the flames — not fan others. Unfortunately for Mayor Kasim Reed, the controversy over the firing of Christian fire chief Kelvin Cochran is igniting a different debate over religious liberty. Despite insisting that the decision to sack Cochran had nothing to do with his faith, it seems that Mayor Reed’s decision was rooted in nothing but. Angry over a book written for a men’s bible study that Chief Cochran had the city’s permission to publish, Who Told You That You Were Naked?, the Mayor is finding out just how unpopular his intolerance is. For now, the newest face of the religious liberty debate has no intentions of backing down. We shouldn’t either! Sign FRC’s petition in support of Chief Cochran and I will let him know that you are standing with him as he stands for the truth! If you’re in the Atlanta area tomorrow, please join us at 1:30 p.m. for the rally in the Capitol Rotunda.

Perkins, as usual, is lying. The mayor’s office says they never heard about the book and as the Atlanta Journal-Constitution declared, “Cochran forced his own firing” by vowing to continue to proselytize at the workplace upon returning from his suspension.