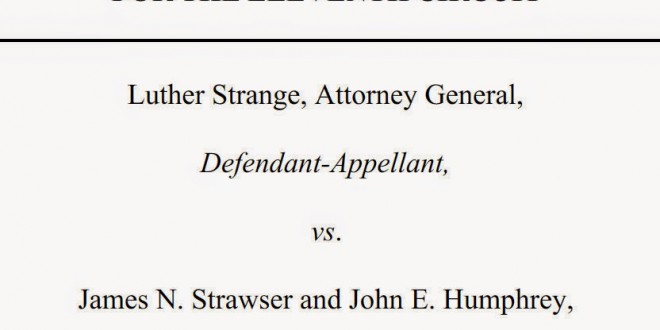 Alabama Gov. Robert Bentley today filed an amicus brief with the Eleventh Circuit Court in support of Attorney General Luther Strange’s petition for a stay on same-sex marriage until SCOTUS makes its ruling. Bentley’s brief declares that it is “demeaning” to democracy to allow same-sex marriages to occur. Via Equality Case Files:

On a complicated and controversial issue such as this, with no clear warrant inthe Constitution for imposing one State’s conception of marriage on another, the judiciary has a duty not to do so. As the Supreme Court stated last term, the people of the sovereign States have a “fundamental right” that is “held in common,” the right“to speak and debate and learn and then, as a matter of political will, to act through a lawful electoral process.” Schuette v. Coal. to Defend Affirmative Action, 134 S.Ct.1623, 1637 (2014). And “[t]hat process is impeded, not advanced, by court decrees based on the proposition that the public cannot have the requisite repose to discuss certain issues. It is demeaning to the democratic process to presume that the voters are not capable of deciding an issue of this sensitivity on decent and rational grounds.”

The brief was filed by Al Algricola, the same lawyer who represents Alabama’s association of probate judges.

Previous ALABAMA: NCLR Steps In To Represent Lawyer-Less Couple In Marriage Case
Next Perkins: Gays Are Persecuting Christians With Photos On Their Facebook Pages