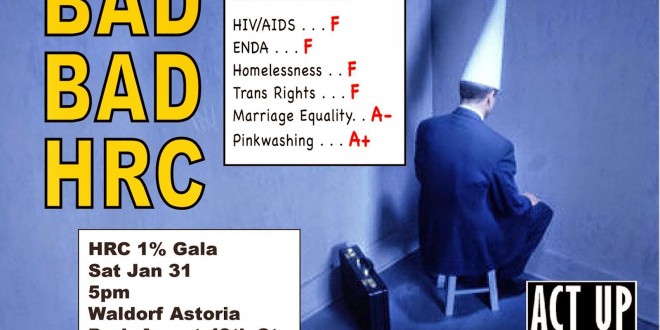 ACT UP To Protest HRC Gala In NYC

The AIDS Coalition To Unleash Power (ACT UP) and other HIV activist organizations will converge to protest the neglect of the AIDS crisis by mainstream LGBT organizations at the annual self-congratulatory gala held at the Waldorf Astoria in New York City by Human Rights Campaign (HRC). HRC has been absent on HIV in major ways. Even as HIV advocates go hat in hand begging for programs like PreP (Pre-Exposure Prophylaxis), HRC throws galas for thousands of dollars a plate and is nowhere to be found in New York City on critical issues such as LGBT homelessness. ACT UP New York demands that HRC immediately appoint a liaison dedicated specifically to work on HIV—not a Fellow that works temporarily. HRC should work with grassroots organizers on the ground. While the party is going on at the Waldorf, countless homeless LGBT youth are in life-threatening need on the streets of New York.

We demand that HRC work to repeal the outdated CDC policy regarding federal funding for explicit and comprehensive sex education materials. Buried in Jesse Helms’ basement since 1992, his homophobic and HIV-phobic legacy continues to impede effective HIV prevention efforts. Speaking about the ban, ACT UP member Andy Velez said: “The Human Rights Campaign’s absence on a core issue like HIV prevention policies is more glaring evidence of their failure to demonstrate bold leadership.” A whopping thirty-three pages, buried somewhere on the HRC website, is devoted to HIV. By contrast, four hundred thirty-six are dedicated to marriage. It seems weddings are more important than the fag dying in Louisiana because he can’t get meds. Right here, there are more than a hundred thousand New Yorkers living with HIV and thousands more getting it every year, all relying on the same scant resources.