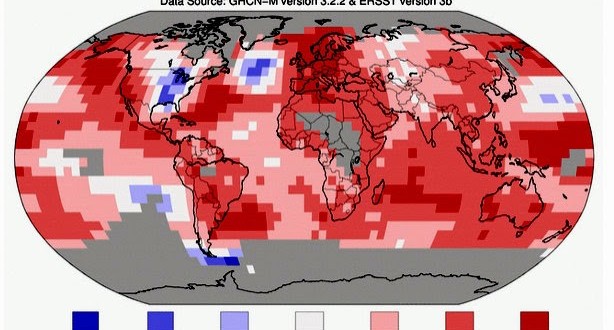 It is official: According to both NASA and the National Oceanic and Atmospheric Administration, the year 2014 was the hottest ever measured, based on records going back to the year 1880. It now surpasses all past scorchers, including 1998, 2005, and 2010. Indeed, except for 1998, says NASA, the 10 hottest years recorded have all occurred since the year 2000. Perhaps the most surprising thing about the new record is that it occurred even though 2014 was not an El Niño year, of the sort that usually powers the already up-trending global average temperature to new highs. The two agencies released a joint announcement this morning, following a careful collaborative effort in which experts closely compared analyses. Last year, NASA and NOAA also collaborated on an analysis of 2013, which wasn’t as warm but still ranks within the top 10 hottest years on record.

An atmospheric scientist weighs in:

“If you are younger than 29-years old, you haven’t lived in a month that was cooler than the 20th century average. That’s a new normal that is a result of human activities on top of the natural varying climate that has global temperature trends moving very quickly towards a 1-2 C increase. While that may sound insignificant, it’s best to think of it as the difference between a low-grade fever and one just a few degrees higher that can have an impact on the body.”

Previous Celebs Sing Sleater-Kinney
Next One Million Moms Vs Hershey