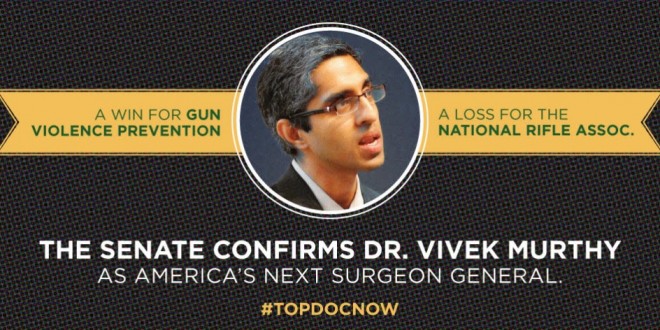 We Have A Surgeon General

President Obama’s pick to serve as the next surgeon general was confirmed Monday evening more than a year and half after being nominated, the first of nearly a half dozen of the president’s picks set for confirmation this week as Democrats prepare to cede control of the U.S. Senate. Senators voted 51 to 43 to confirm Vivek Murthy, a Harvard and Yale-educated doctor at Brigham and Women’s Hospital in Boston, whose nomination had been in limbo amid concerns about his experience, and opposition from the gun lobby.

Senators in both parties had questioned whether he was too inexperienced for the job, or whether his efforts to get Obama elected and support the president’s health-care law made him too polarizing a figure. But by far the most vehement opposition to Murthy’s confirmation came from the National Rifle Association, which called him a “serious threat to the rights of gun owners” because of his support of tighter gun control laws. That animosity in part dates to a tweet Murthy sent out in 2012: “Tired of politicians playing politics w/guns, putting lives at risk b/c they’re scared of NRA. Guns are a health care issue.”