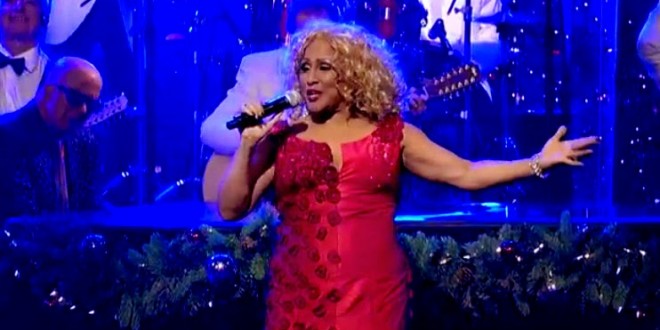 On Friday night Darlene Love closed out a three-decade run of performing her holiday classic on The Late Show. Via Rolling Stone:

The tradition began in 1986 when Love first performed “Christmas (Baby Please Come Home)” on Letterman’s Late Night program on NBC, and while a small four-piece band backed the “He’s a Rebel” singer for that rendition, the size of the performances have increased throughout the years, with 2014’s version of the 1963 Christmas favorite one of the largest ensembles yet: Nearly a dozen backup singers, strings, a horn section and Love – still sounding as vibrant as she did in 1986 – all recreating the track’s Wall of Sound production. The Rock and Roll Hall of Famer delivers her penultimate verse atop band leader Paul Shaffer’s piano and stays up for the remainder of the segment. The move was triumphant, poignant and strategic: Love would later reveal to the New York Times that she hopped up there to avoid embracing Letterman during the performance, because she was concerned she’d break down in tears; the two just shake hands instead.

Previous Castro: US Must Respect Our Communism
Next FLORIDA: Some County Clerks Dig In Their Heels On Issuing Marriage Licenses