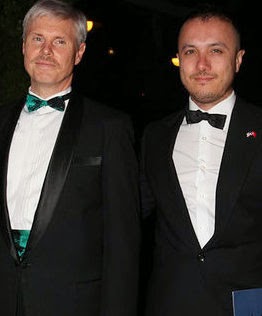 Charles Hunter, US Consul General to Turkey, has confirmed to the local press that he will marry his Turkish boyfriend with the ceremony to take place in Wisconsin.

Hunter was at an event at the Dutch consulate the previous day where he sang at an a capella choir. He responded to reporters’ questions afterward. Naturally, almost all questions were about his affair with Turkish artist Ramadan Çaysever, and Hunter spoke about the affair for the first time. He said he “confirmed” all the reports in the press about his affair and planned marriage, but avoided elaborating on the matter. Çaysever, who frequently accompanies the Consul General at events, was absent at Tuesday night’s event. Meanwhile, rumors made the rounds in the media about the top diplomat’s affair. Some media outlets claimed Çaysever converted to Christianity for his partner. Milliyet, a Turkish daily, claimed Hunter asked for assignment of a bodyguard for Çaysever who has moved in with him, but has not been assigned one yet.

Hunter reportedly met Çaysever at one of his concerts. His music sounds quite like 80s Italo.