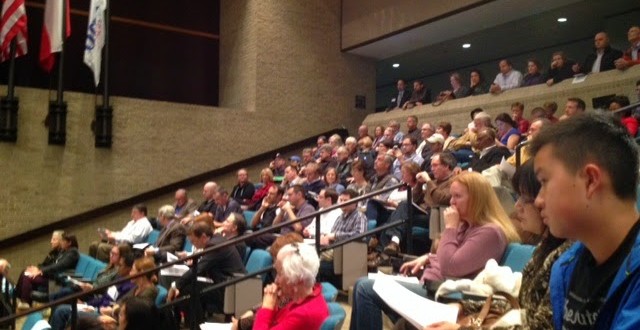 Some of us listening closely during last night’s LGBT rights debate in Plano, Texas picked up on a worrying comment by the city attorney that seemed to indicate that there are “religious freedom” and other loopholes in the ordinance. There are and they are troublesome.

According to the revised ordinance, discrimination based on a resident’s sexual orientation or gender identity is prohibited in regards to public accommodation, employment, housing transactions and city contracting. However, religious and political groups as well as nonprofit organizations are exempt from the ordinance.

City Attorney Paige Mims said the ordinance also includes a waiver process for businesses to be exempt if the owners feel the policy would not allow them to conduct business based on their personal faith. Individuals and organizations found in noncompliance to the ordinance would be charged with a Class C misdemeanor, the least severe class of misdemeanor. While the ordinance does make it illegal to discriminate against gender identity in a public place, Mims said that would not extend to public restrooms and locker rooms which would still be segregated based on physical anatomy.

“We realize that privacy interests need to be balanced with equality interests,” Mims said at the meeting. “We took a lot of care to look at constitutional issues and freedoms that people have that are protected under the law … We’ve recognized in this ordinance that due process needs to be allowed and if people do have those [religious] defenses, they’re required under law to give the city notification … and we’re going to evaluate that.”

So. Trans folks still can’t use public restrooms. Businesses with a “religious waiver” can still turn away LGBT customers. And all non-profits are exempted. The rest of the bill IS a lovely advance, of course, but we certainly did not get a compete win last night after all. And even with those loopholes, the anti-gay Plano-based Liberty Institute is vowing to sue.