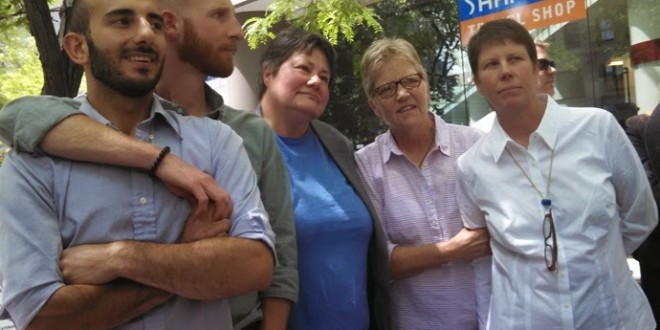 Via the Salt Lake Tribune:

These six people put their names to the lawsuit challenging Amendment 3. They stood up, stood together and helped history along. Through 2014, they rode the legal roller coaster — to the 10th U.S. Circuit Court of Appeals, which upheld Shelby’s ruling, and onto the U.S. Supreme Court, which issued a stay on the ruling. In October, the high court declined to hear appeals from Utah and four other states. In essence, the denial made same-sex marriage legal in those states. Because of these Utah plaintiffs — who bravely made public their most private lives — the state took an unlikely position among the vanguard in the biggest civil-rights movement of the day. Forever, their names will be associated with a tidal wave of change that swept the country. fFor that, Derek Kitchen and Moudi Sbeity, Karen Archer and Kate Call, Laurie Wood and Kody Partridge are The Salt Lake Tribune Utahns of the Year.