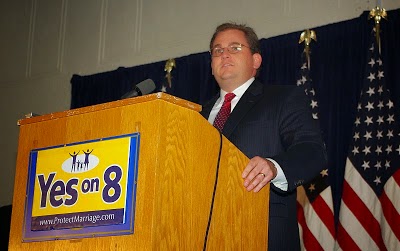 Prop 8 Backers: SCOTUS Will Reject Gay Marriage So Send Us Lots Of Money

“I am confident that the Supreme Court will uphold the states’ rights to define marriage. Even as Justice Anthony Kennedy wrote the majority opinion striking down the federal Defense of Marriage Act (DOMA) in 2013, he did so because it infringed upon the states’ authority over marriage. He relied on the states’ ‘essential authority to define the marital relation,” and our nation’s ‘history and tradition of reliance on state law to define marriage.’ As a key swing vote on the Supreme Court, Justice Kennedy’s viewpoint could very well determine the outcome here. That’s why I believe the Supreme Court will ultimately rule in our favor. And when it does, we need to be ready for a nationwide ‘comeback’ for traditional marriage.

“If you’re like me, you probably feel as though the last couple of years have been especially dark times for marriage and the family in America. The traditional, natural family unit has been under relentless attack; and liberal, unelected judges have run amok in attempting to reform society as they see fit by judicial fiat. The legitimacy of the courts is more precarious than ever. But great victories often emerge from the darkest of times. This battle is not yet lost. I still have hope that traditional marriage will be restored in California. Do you? If you would like to help us prepare for the coming challenges, we welcome your tax-deductible and confidential contribution of any size.” – Andy Pugno, head of Protect Marriage.