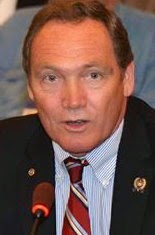 Gay New Jersey Assemblyman Tim Eustace has introduced a bill that would ban the use of the “gay panic” defense.

Under New Jersey law, a defendant can be charged with manslaughter – a lesser charge than murder – if, among other things, the crime “is committed in the heat of passion resulting from a reasonable provocation.” Eustace’s bill states that that a provocation can not be interpreted as reasonable if it is based on “the discovery of, knowledge about, or potential disclosure of the homicide victim’s actual or perceived gender identity or expression,” including “circumstances in which the victim made an unwanted, non-forcible romantic or sexual advance toward the actor, or if the victim and actor dated or had a romantic or sexual relationship.”

Earlier this year California became the first state to institute such a ban.