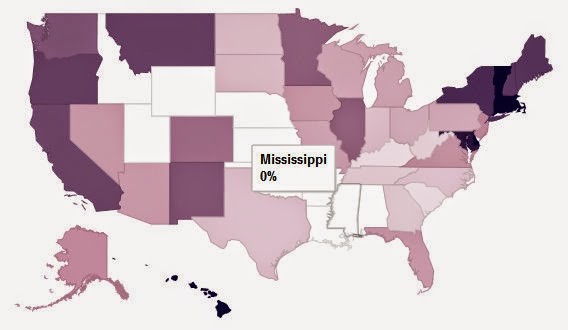 About 45 percent of all governors and members of Congress across the country support same-sex marriage, and in all but 10 states there is at least one member of Congress or the governor who does. The percentage of politicians who support marriage for same-sex couples is slightly lower than the percentage of Americans who do. A September Pew poll found that 49 percent of respondents were in favor of gay men and lesbians being allowed to legally marry, while 41 percent were opposed and 10 percent didn’t know. Using information from the Human Rights Campaign and governors’ public statements, the percentage of elected officials who support marriage for same-sex couples was mapped out. Vacant seats were not included in states’ total, and elected officials whose views on marriage were not clear were not counted as being supportive.

Six states are ranked at 100%: Connecticut, Delaware, Hawaii, Massachusetts, Rhode Island, and Vermont. Hit the link for the interactive map.

Previous Linda Harvey: Boycott Macy’s
Next One Million Moms: We Censored Dozens Of Anti-Christian Shows In 2014