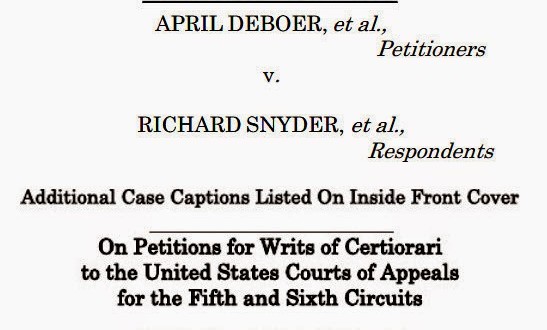 Idaho Gov. Butch Otter today filed an amicus brief with the Supreme Court in which he demands that they hear the appeal from his state over any others.

If this Court is prepared to decide the constitutionality of state man-woman marriage laws – as amicus believes it should – it is important that the Court have before it at least one case in which state officials will vigorously defend those laws on the merits. Unless state representatives in one case are mounting such a defense — including an explanation of why the man-woman definition of marriage satisfies any form of heightened scrutiny — neither the Court nor the public can be assured that the ultimate decision will be the product of a fair contest between opponents who made the strongest possible arguments on both sides.

Although the officials in the cases now before the Court have been well represented, none has demonstrated a willingness to mount such a defense. Perhaps they believe this Court will inevitably reject all the arguments for heightened scrutiny, thus making a defense under such a standard superfluous. Or perhaps some fear (incorrectly) that a vigorous defense will impugn the parenting skills of same-sex couples and thus be offensive to gays and lesbians. Whatever the reason, these officials’ presentations have left an important viewpoint unrepresented, and it is one that needs to be vigorously presented in this Court.

That is a main reason Governor Otter respectfully suggests that the Court ensure that the Idaho case Otter v. Latta, – in which the Governor is a named party – is among the cases the Court uses as “vehicles” for deciding the constitutionality of the man-woman definition. Unlike the laws now before the Court, Idaho’s definition has been vigorously defended, in part on the ground that it satisfies the heightened scrutiny that the Ninth Circuit held applies to such laws. And unlike those cases, the Ninth Circuit in Latta purported to address Idaho’s heightened-scrutiny defense. Moreover, Latta will likely be before the Court in a very few days: Unless the Ninth Circuit quickly grants the pending petition for rehearing en banc, amicus intends to seek this Court’s review by January 5, 2015.