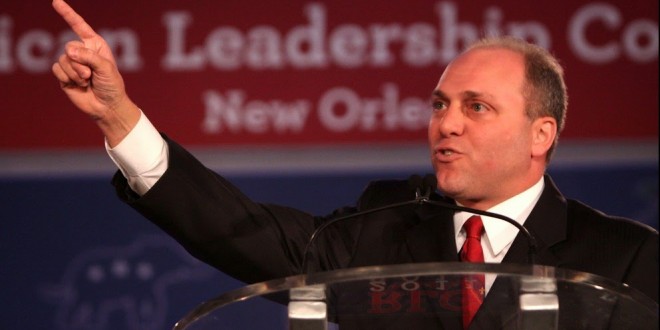 Rep. Steve Scalise (R-La.), the House majority whip, acknowledged Monday that he spoke at a gathering hosted by white nationalist leaders while serving as a state representative in 2002, thrusting a racial controversy into House Republican ranks days before the party assumes control of both congressional chambers. The 48-year-old Scalise, who ascended to the House GOP’s third-ranking post earlier this year, confirmed that he once appeared at a convention of the European-American Unity and Rights Organization. That organization, founded by former Ku Klux Klan leader David Duke, has been called a hate group by the Southern Poverty Law Center. “Beyond hosting a website, whitecivilrights.com, and staging an occasional conference, EURO is a paper tiger, serving primarily as a vehicle to publicize Duke’s writing and sell his books,” the SPLC writes on its Web site.

Scalise, it turns out, has a LOT in common with hate group leader and fellow Louisianan Tony Perkins, who also once keynoted the convention of a white supremacist group AND has financial ties to KKK leader David Duke. Scalise, NOT incidentally, was the lead author of Louisiana’s constitutional ban on same-sex marriage.