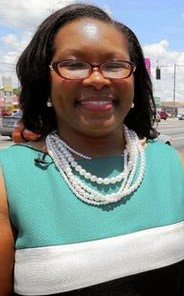 Via the Orlando Sentinel:

A judge today cleared the way for Orange County Clerk Tiffany Moore Russell [photo] to issue marriage licenses next week to same-sex couples. That ruling, by Circuit Judge Tim Shea, appears to mean that gay and lesbian couples will be able to get married at the Orange County courthouse on Jan. 6, the first day that becomes legal under a landmark federal ruling in Tallahassee. Moore Russell had filed suit yesterday in the courthouse where she works, asking a judge to give her instructions on what to do. A Tallahassee federal judge has declared the state’s ban on same-sex marriage unconstitutional and ordered his ruling implemented Jan. 6. But the Florida Association of Court Clerks and Comptrollers two weeks ago told its members statewide not to issue the licenses, and Moore Russell said at the time that she would follow that advice. Behind the scenes, though, she was working on the problem. Yesterday she filed a petition, asking Shea to clarify what she should do. Today he issued an order, telling her that if she issues marriage licenses to same-sex couples, she would not be breaking the law or violating her oath of office.

In a separate action, two Orlando same-sex couples yesterday filed suit in state district court, asking that Russell be required to issue them marriage licenses. According to the above-linked report, Russell is not opposing their suit and actually helped them with the filing by issuing them a formal denial letter, which was the required “ammunition” to file their complaint.

RELATED: Last week state attorney John Ashton declared that he would not charge either of the two county clerks under his jurisdiction if they issue same-sex marriage licenses. Ashton oversees Osceola County, whose clerk, so far, is the only one that has vowed to issue licenses to all same-sex couples. Ashton also oversees Orange County.

UPDATE: Russell has issued a statement.

“I thank the Court for providing clarity on this issue. I specifically want to thank Judge Shea for his guidance in this matter. Since the question of issuing same-sex marriage licenses was first directed at Clerks, my office has consistently stated that we would continue to seek judicial clarification. That is why we filed this emergency petition and we are grateful for the clear direction it provides as we move closer to January 6.”