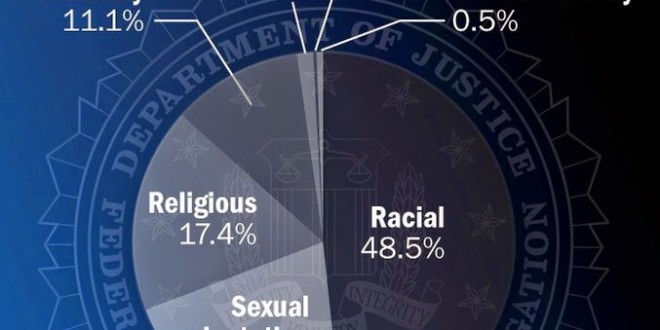 Today, the FBI released its annual Hate Crime Statistics report, which revealed that 5,928 hate crime incidents involving 6,933 offenses were reported by our law enforcement partners to the Bureau’s Uniform Crime Reporting (UCR) Program in 2013. These hate crime incidents impacted a total of 7,242 victims—which are defined as individuals, businesses, institutions, or society as a whole. Hate Crime Statistics, 2013—the first UCR publication to contain data collected under the Matthew Shepard and James Byrd, Jr. Hate Crime Prevention Act of 2009—has a few changes from previous reports. First, biases against gender (male or female) and gender identity (transgender and gender nonconformity) have been added to the list of bias categories. And in response to the Shepard/Byrd Act, we modified our data collection so that reporting agencies can indicate whether crimes were committed by, or directed against, juveniles.

From the report: “60.6 percent of the reported 1,402 hate crime offenses based on sexual orientation were classified as anti-gay (male) bias.” Next year’s report will compile crimes based on anti-Arab bias for the first time.