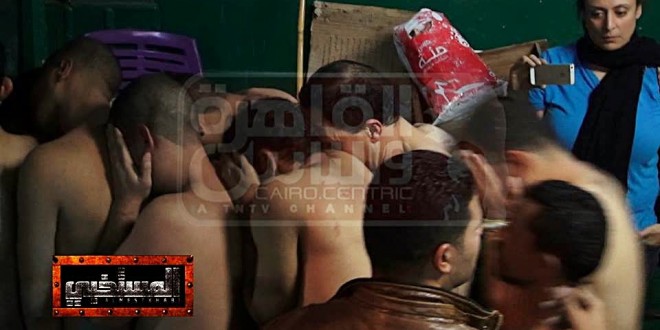 At about 10 PM last night, December 7, police carried out a massive raid on a hammam (bathhouse) in the Ramsis area of Cairo, not far from the main railway station. They arrested many men — dozens, reportedly — and hauled them, stripped naked like concentration-camp inmates, to the trucks. Someone living nearby who watched the assault wrote on social media that “police together with Central Security forces attacked the bath.” (Central Security, Amn el-Merkezi, is an army force mainly composed of raw recruits. it takes over many policing duties in an increasingly militarized Egypt.) “40 people were arrested. Some were beaten up in the baths, and they were all arrested with no clothes.” He said “a female journalist and a cameraman” arrived “before they attacked the baths. She tried to enter and film inside, and she was kicked out by the owner. Immediately this was reported [to the police], and the baths were attacked. People say there were informers from the police inside the baths before that.” The reporter was Mona Iraqi, presenter for the TV program El Mostakbai (The Hidden), which airs on the pro-government Al-Qahira wal Nas (Cairo and the People) news channel. Around 2:00 this morning, Mona Iraqi posted proudly about the raid on her Facebook page — along with still shots, bearing the El Mostakbai watermark.

It is presumed that the reporter can be seen in the photo above. More photos and additional details about the raid are at the link.

RELATED: Last month eight Egyptian men were sentenced to three years in prison for appearing in an alleged same-sex wedding video filmed aboard a Nile riverboat.