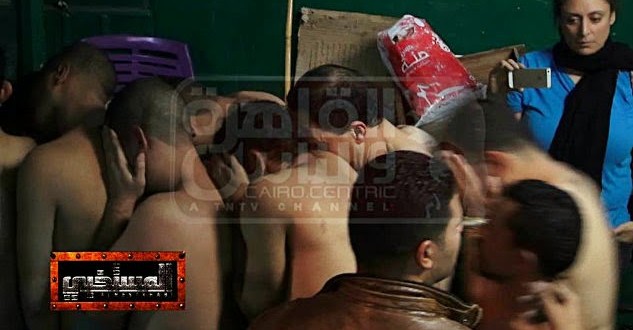 EGYPT: At The Bathhouse Raid Trial

Earlier this month 26 men were arrested in a police raid on a Cairo bathhouse. Veteran activist Scott Long was in the courthouse yesterday for the opening of the trial. An excerpt:

Police opened the courtroom doors at about 1:40 and let 60 or 70 people press through. The next twenty minutes were pure chaos. Guards hustled the cowed defendants in, bowed and chained in a line at the wrists, while the bailiff at the door beat them over the shoulders. The men were locked in the courtroom cage. Then, having admitted the families to see their sons humiliated, the guards decided to throw them out. This I remember from the Queen Boat trial in 2001 — the first time I ever attended a court in Egypt: in high-profile cases, the families are brutally barred from the hearing, while journalists are let in, as if the state wants to show off its achievements. The screaming and wailing were unbearable. To call the scene heartrending gives life to the cliché. Even my old heart, ragged as an ancient land deed, was shredded to scraps and kindling. One mother, while the cops forced her out of the room, shouted to her son in the cage: “Remember you’re a man! Don’t be afraid! Don’t be afraid of anyone except God!” Another woman had come with a daughter and a boy of about 10. The child cried uncontrollably as he crouched on the benches, and he cried still more as he watched his mother manhandled and thrown out just before he was.

Hit the link and read the full report.

Previous Dr. Evil Drops In On SNL
Next Sarah Palin: Merry Christmas And Buy My Book Of Holiday Word Salad