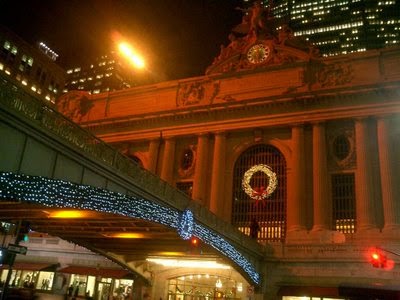 This story makes its eleventh annual appearance on JMG….

Grand Central Terminal functions as the mechanical heart of midtown New
York City, pumping out several thousand workers and tourists on one
beat, then sucking in several thousand more on the next.

The tourists gawk up at the gloriously ornate ceiling and uselessly
flash their digital cameras at objects hundreds of feet away.

The commuters rush up to the track displays to determine their track
number, then dart across the terminal floor, dodging the milling
tourists, heads down, like running backs heading for the end zone.

I’m walking through the massive main room just as the holiday laser show begins on the ceiling. To the tune of Take The “A” Train,
the laser depicts two trains arriving from different directions. The
trains stop opposite each other and a reindeer leaps out of each one
and crosses over to the opposite train.

The laser traces the outline of one of the zodiac constellations
painted on the ceiling. The Cancer crab leaps to life and becomes the
Crab Conductor, waddling down the center aisle of the car, punching
the reindeers’ ticket stubs with his claws.

I move over to the edge of the room, near the entrance for Track 25,
so I can watch the reaction to the show. As usual, I’m more
entertained by watching the audience than by watching the actual show.

At the ticket windows, standing in front of signs that say “Harlem
Line” or “Hudson Line”, commuters tilt their heads painfully back to
view the show directly overhead. The tourists cluster in delighted
circles, holding each others’ elbows for balance as they nearly bend
over backwards.

Some people move to the edges of the great hall, as I have, to remove
themselves from the traffic flow while they watch. Among those that
come to join me on the perimeter of the room is a lesbian couple.
They stand quite close to me, the taller woman behind the shorter
one, with her arms wrapped around her, supporting her a bit as they
both lean back on the marble wall.

The shorter woman is stout with a large firm chest. Her hair is short
and brushed back into what might have once been called a ducktail.
She has an ornate tattoo on her left forearm and she has a leather
wallet protruding from the rear pocket of her jeans, attached to her
leather belt by a short silver chain. She has more than a passing
resemblance to Tony Danza, her big boobs notwithstanding, so
naturally (in my head) I name her Toni.

Toni’s girlfriend is blond and her short ponytail dangles just above
her collar. She is wearing long Christmas tree earrings which nearly
brush her shoulders. Her lanky, sinewy limbs are bound in a tight
running outfit, over which she is wearing a school athletic jacket. I
imagine that she might be a coach at Yale or Harvard, perhaps a
girls lacrosse coach, or maybe track and field.

Coach is squeezing Toni tightly and they bounce together to the music
a bit. Coach looks over at me and catches me smiling. She nudges
Toni, who looks over at me too, and we all grin goofily at each other
for a moment.

I look around the room and it’s as if time was frozen for just a
second, every person stopped in mid-stride, eyes cast upward, mouths
open in silent joy.

Coach relents and she and Toni begin a beautiful, slow waltz, moving
in half-time to the music. As you might have guessed already, Toni
leads.

As they dance, their eyes remain locked on each other. Toni is giving
Coach an intense look, her lips tightly curled into a satisfied
smile. Coach is grinning from ear to ear and again, she giggles.

All around Coach and Toni, the tourists, the businessmen, the
students, the conductors, even the guy with a broom…they’re all
watching. Some are expressionless, but more are smiling, and some of
them…some of them are frantically fussing with their cameras, eager
to capture this magical New York Moment.

Serendipity prevails, the tune ends, and Toni dips Coach backwards
with a dramatic up-sweep of her free arm as a firestorm of camera
flashes erupt around them. Toni pulls Coach up and close to her and
they hug. There’s another camera flash and the crowd begins to move
along.

The laser show is being concluded with giant sprigs of mistletoe
appearing over our heads. This time it’s Coach who bends down and
plants a long tender kiss on Toni’s non-lipsticked mouth. There’s
another flash of cameras from the delighted audience.

Previous FLORIDA: Judge Gives State Until Monday To Respond On Marriage Motion
Next The Interview Is On YouTube