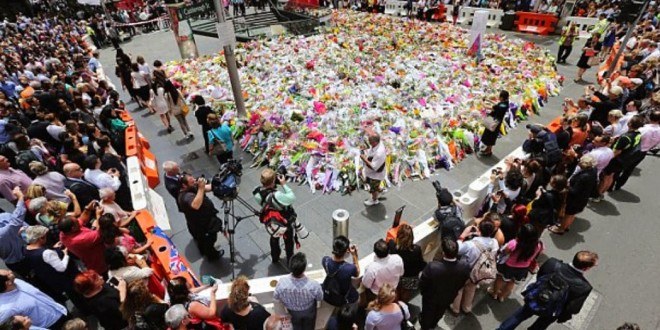 Siege victim Tori Johnson’s partner has thanked Australia and the world for the outpouring of support for the family that has come in the wake of the Martin Place tragedy. Thomas Zinn read an emotional statement directly to viewers on the TODAY Show this morning, speaking of the family’s pride in the strength of the community. “As you can imagine, this is a very difficult time for our family,” he said. “We are experiencing unimaginable grief but when we look at the sea of flowers with all the heartfelt messages, and the crowds of supports at Martin Place, we know this grief is shared by the country and the rest of the world.” He extended particular thanks to the police and emergency services who worked tirelessly to resolve the siege and supported the family during those horrible hours. He also offered Mr Johnson’s family’s love to the family of the other siege victim, barrister Katrina Dawson.

Johnson’s father speaks in the final clip below. The “sea of flowers” at the site of the murders will be composted and used as part of the landscaping for a planned memorial.