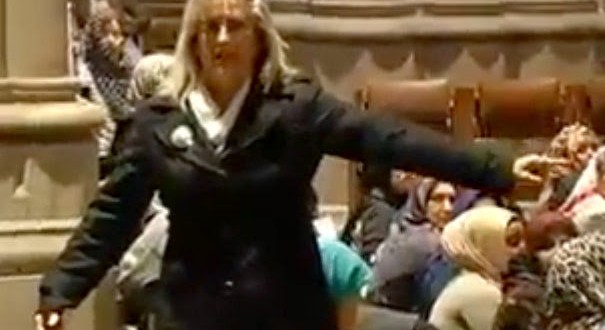 On Friday the National Cathedral in Washington DC held its first-ever Muslim prayer service, much to the anguish of Teabagistan. The event was briefly disrupted by a shouting Christian woman, who has been interviewed by (who else?) World Net Daily:

Christine Weick, a 50-year-old Michigan woman with flowing blonde hair who lives out of her car, rose from the packed National Cathedral, the hall of halls in terms of religious prominence in America, and moved toward the front of the church. She pointed to the cross hanging overhead. That cross seemed to be the one thing nobody wanted to look at, she told WND Saturday in an exclusive interview. The Muslims had set up their prayer rugs in such a way that their backs were turned on the cross, which they consider an alien religious symbol. Jesus was a prophet but was not the son of God and never died on a Roman cross, according to Muslim teaching. Yet, they found themselves staring at a woman who demanded the cross become the center of attention. She then blurted out the message she had traveled all the way from Tennessee to deliver. “Jesus Christ died on that cross. He is the reason we are to worship only Him. Jesus Christ is our Lord and Savior,” she said. “We have built …allowed you your mosques in this country. Why don’t you worship in your mosques and leave our churches alone? We are a country founded on Christian principles.” She had instantly become a folk hero of sorts for thousands, if not millions, of Christians who read what happened or watched the video that was posted on the Internet.

Weick tells WND that she is homeless because her family has disowned her due to her opposition to same-sex marriage and “other moral issues.” She first made an appearance on JMG on Mother’s Day this year when a slushee was thrown in her face as she waved a sign reading, “Thank Your Mom Today That She Isn’t Gay!” Christian Nightmares and other sites wonder if it’s also Weick that stars in last week’s now-legendary “Monster Energy Drinks Are From Satan” viral video, which now has nearly seven million views. She credits the Drudge Report for alerting her to the event at the National Cathedral.

RELATED: In January 2013, the National Cathedral announced that it would begin hosting same-sex weddings, prompting anti-gay activists to launch a petition drive calling for Congress to suspend its federal funding. Last June when the Supreme Court struck down DOMA, the Cathedral pealed its bells for several minutes in celebration. The Cathedral has hosted state funerals for several presidents, including Ronald Reagan.

Previous Alone Together
Next The Girl From Empanada