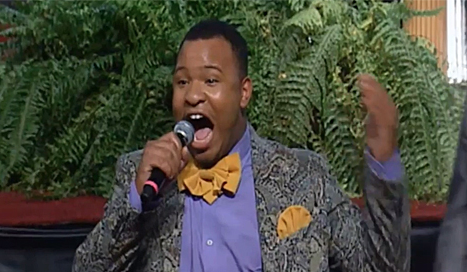 The Church of God In Christ (COGIC) has released a statement about the young man whose renouncement of his gayness went wildly viral this week:

A video, which is now viral, of a young man stating his deliverance from a particular lifestyle does not, in any capacity, speak to all of the remarkable things that transpired during this great church convention. We believe that we should reflect the love and compassion of our Lord and Savior Jesus Christ in all that we do. We do not in any way compromise our biblical position against same sex unions or in favor of biblical teaching on matters of sexual conduct. At the same time we expect that our clergy and laity will be civil and considerate as they speak to men and women regarding issues related to our Christian faith. We love all people, regardless of their faith or moral standards. When we fail to express ourselves with love and humility we contradict our witness to the world Furthermore, the Church of God in Christ wholly condemns acts of violence against and the subjugation of any person to verbal or physical harassment on the basis of their sexual stance. Such actions violate entirely the Christian’s obligation to love our neighbor as we love ourselves. The Church of God in Christ will have no further comment on this matter.

A local television station has investigated and notes that the young man was arrested for insurance fraud earlier this year. From CBS Atlanta:

“Well, my conclusion is he’s a con artist, he’s a scam artist,” says internet talk show host Thaddeus Matthews. Matthews interviewed Caldwell Tuesday and said other things about him do not add up. “He says that he’s going to medical school online,” said Matthews. “Where do you go to medical school at, online?” Caldwell was also arrested back in May on charges of “fraudulent insurance.” WMC Action News 5’s Jason Miles briefly spoke with him on the phone before he quickly put his manager on the line. Both firmly disputed that anything was set up. Caldwell also claimed he hasn’t made a dime from his “deliverance.” Porter of Memphis handed him a $100 bill following the testimony. Bishop Porter’s church referred WMC to COGIC public relations. They issued a statement and said it would be the only comment.

RELATED: In addition to the numerous response and parody videos, the incident has now been animated.

Previous Headline Of The Day
Next HARLEM: Activists To Fundraise For Ali Forney In Response To Hate Church