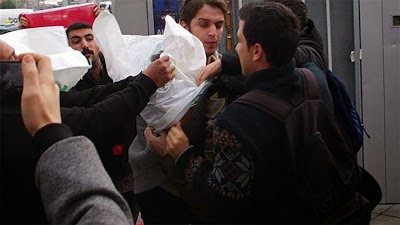 Three U.S. sailors were attacked in Istanbul by an angry mob on Wednesday, as a grew of about 20 nationalists threw objects at them, chased them and briefly threw a bag over one of their heads. The incident was publicized in a video online, and acknowledged by the U.S. Navy. The attack underscores the volatility in Turkey, a longtime U.S. ally that increasingly does not see eye-to-eye with Washington on foreign policy, especially over how to handle the Islamic State militant group in neighboring Syria.

In the video, one of the Turks said the Americans looked like members of the U.S. Army. They claimed to be members of the Turkey Youth Union, which is opposed to working with America and becoming members of the European Union.“We define you as murderers, as killers… and we want you to get out of our land,” one man said, seconds before the attack ensues. The Navy said the Americans were sailors assigned to the USS Ross, a destroyer, and in Turkey for a scheduled port visit. They appeared to be in their late teens or early 20s. They were able to get away without sustaining injuries, and are back aboard the Ross, Navy officials said.

The US embassy in Turkey has responded on Twitter: “The video showing an assault on three visiting American sailors is appalling. While we respect the right to peaceful protest and freedom of expression, we condemn today’s attack in Istanbul, and have no doubt the vast majority of Turks would join us in rejecting an action that so disrespects Turkey’s reputation for hospitality.”