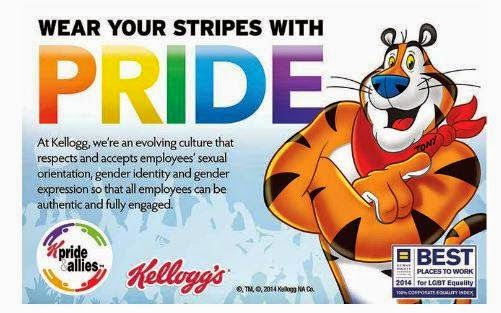 Tony The Tiger For Gay Pride

The American Family Association is ever so pissed that Kellogg’s took out an ad in last month’s Atlanta Pride magazine. The anti-gay CNS News has the story:

Kellogg’s was a sponsor of the Atlanta Gay Pride March and festival last month. Apparently, Tony the Tiger wants to make sure you and your kids “wear your stripes with pride,” gay pride that is. According to the AFA Facebook page, “They even put an ad in the ‘Pride Guide.” But wait, there’s more. According to HRC’s Buyers Guide, Kellogg’s acquired a rating of 100, a perfect score, due to Kellogg’s efforts to support the LGBT community. Worst of all, though, the “PRIDE” ad didn’t even get the pun right. Tigers don’t belong in “prides,” let alone pride parades.

In 2012 Catholic League blowhard Bill Donohue went apeshit on Kellogg’s because they advertised on Jon Stewart’s “anti-Catholic” Daily Show. Kellogg’s boomtastic response: “Change the channel or turn off the TV.”  Commenters on the AFA’s Facebook page are calling for a boycott of Kellogg’s, so standby for another hilariously failed move by NOM.