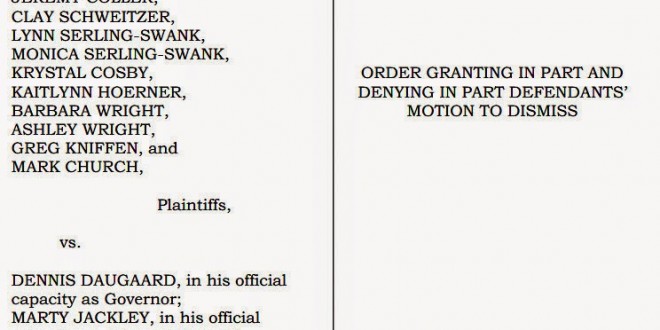 The above federal court today denied South Dakota’s demand for the dismissal of the marriage equality lawsuit filed in late May. The dismissal demand was denied, in part, on the basis of case precedent that the court today ruled as “not controlling.” But much more interesting is the Court’s statement on last week’s ruling by the Sixth Circuit Court of Appeals:

Most recently, a panel of the Sixth Circuit Court of Appeals overturned district court decisions in four states which had struck down same-sex marriage laws. The Sixth Circuit stated that applying the doctrinal developments exception laid out in Hicks “would be a groundbreaking development of its own.” The Sixth Circuit’s reading of the doctrinal developments exception is too narrow and would effectively eliminate that exception by requiring either an explicit or implicit overruling of a prior decision. Furthermore, it is difficult to reconcile the Supreme Court’s statement in Windsor that the Constitution protects the moral and sexual choices of homosexual couples with the idea that state laws prohibiting same-sex marriage do not present a substantial federal question. Thus, the Sixth Circuit’s reasoning is not as persuasive as the reasoning of the Second, Fourth, Seventh, Ninth, and Tenth Circuits on this issue.

Yeah, we’ve got this one too. Read the full denial at Equality Case Files.