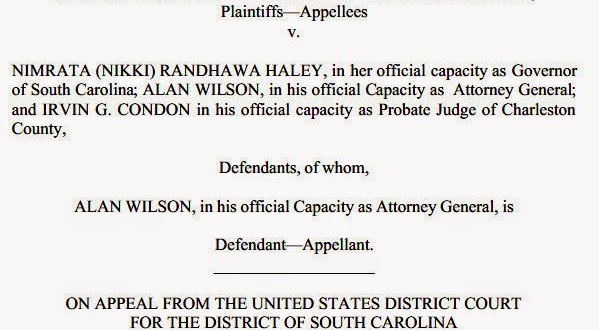 The stay on South Carolina same-sex marriages is due to expire on Thursday. Late last night the plaintiffs in that case filed a motion in opposition to state Attorney General Alan Wilson’s demand that the stay be continued while he flails about with appeals. Via the Post & Courier:

“Currently 34 states permit same-sex couples to marry, or recognize marriages legally celebrated by same-sex couples in other states. If history is any indicator, the State’s claim of potential harm here is overstated, if not completely contrived,” the new filings says. Malissa Burnette, lead attorney in Condon’s case, has said she feels very optimistic the Fourth Circuit will uphold Gergel’s ruling. It is the same court that struck down Virginia’s constitutional gay marriage ban and was among those that triggered the recent cascade of legalized same-sex marriage across the nation.

The Fourth Circuit could rule on Wilson’s request for an emergency stay at any time. Wilson has argued that South Carolina’s voter-approved constitutional gay marriage ban differs enough from Virginia’s that it warrants new consideration by the Fourth Circuit. Burnette counters that the two bans are almost identical. Also, despite a tide of rulings in favor of same-sex marriage nationwide over the past six weeks, Wilson argued that a recent surprise ruling by the Sixth Circuit in Ohio upholding a gay marriage ban makes it more likely the U.S. Supreme Court will weigh in nationally – and perhaps halt the march of gay marriage across the country.

If the Fourth Circuit denies Wilson’s stay extension demand, he will surely immediately
petition SCOTUS, where Chief Justice John Roberts has jurisdiction. If no stay extension is granted by either court, same-sex marriage licenses will be issued at noon on Thursday. South Carolina has a 24-hour waiting period to marry, but judges have waived such requirements in other states on a case-by-case basis.

Previous Quote Of The Day: Pope Francis
Next Freep This Miami-Dade County Poll