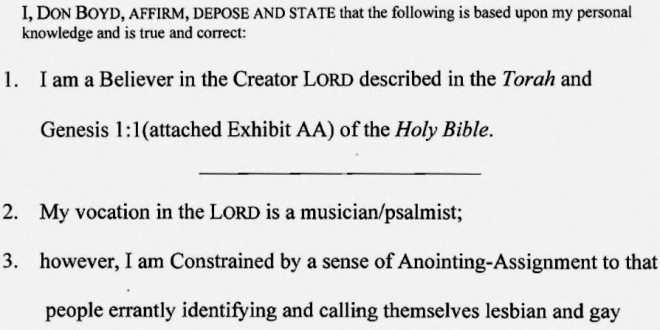 From local loony tune Don Boyd’s typos and misspellings-laden motion to intervene in the challenge to South Carolina’s ban on same-sex marriage:

DON BOYD, MUSICIAN AND PSALMIST, Anointed and Assigned as a Watchmen of the souls of the people errantly calling themselves lesbian and gay WOULD PURSUE DISMISSAL of what is in essence and in truth a RELIGIOUS matter couched of late as a secular deprivation of constitutional rights by the Gay Agenda (of said people errantly identifying and calling themselves lesbian and gay) apostate and rebellious from The Most High GOD and Creator LORD of all the Earth, covetous of the Portion of those marrying and given in marriage in this world, troubled and incited of that Wicked One Lucifer the Devil unto discontent with Divine Constraint their Portion and glorious Calling in this life unto Reward of the Next. [snip] Any ratifying of gay “marriage” would compel me to leave off worshipping THE LORD with music and psalms – free exercise of my religion -to assume the life of a protester and wedding crasher.

The brief concludes with many photocopied pages from the bible and photocopies of dozens of newspaper wedding announcements. And you thought the Unruhs in Kansas were nuts. Enjoy the cracktasticness at Equality Case Files.